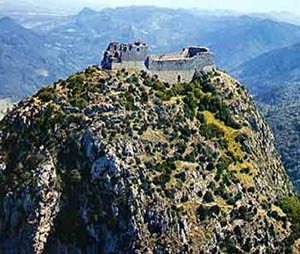 Up until now, Bulgaria was just a place on the map, a country which had been part of the mysterious Soviet bloc, somewhere behind the Iron Curtain that  I learned about in grade school. Now it is alive as one of the Super Powers, a place that cradled civilization and harbored the original Christian teachings through the Bogomils. The Bogomils established a strong center in Bulgaria and later spread the teachings through Croatia, Northern Italy, and Southern France where they were called Cathars. That religion and culture spread through Provence and the Languedoc and was the major source of spirituality in the region until the Pope’s crusade against them. The picture above is of the last Cathar stronghold in Montsegur. The Bogomils faded in Bulgaria under Muslim control.

This country is a powerhouse of spirituality, arts, archaeology, history, mysticism, sacred sites, and beauty, and is destined to rise again as one of the leading centers of New Earth. Unfortunately, at this time, the common conversation is about the corruption in government, low pensions for Seniors, even the highest ranking professionals, the sparse conditions they lived in under socialism, and the fact that most people want to leave. Sometimes, people can be quite nasty in their behavior and demeanor. Then, there are the amazing and wonderful people everywhere and those are a joy and a blessing.

View all posts by Marilyn Summer →

Marys, Anna, and Our Lady of Victory at Notre Dame de Sabart
Reflecting on my time in Slavic countries